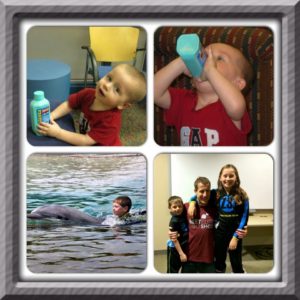 May 2015
Meet Ryan. A little boy who’s favorite thing to drag around was the Mylanta bottle. This little one had us in the ER every 6 weeks for IV fluids. The mere site of a bottle or food would create a complete and total meltdown. We survived on dream feedings. It was hell and absolutely no one understood. 18 months into our journey we met Laura who introduced us to Marci-kids. Life changed 2 weeks later. His reflux was FINALLY was under control, but it took us another two years to fix his food aversion. He is six years old now and is swimming with dolphins and getting ready to compete in his very first kids triathlon. It does get better… Much better. Stay strong, keep the faith and keep taking one more step forward.

I was a frequent visitor to infantreflux.org and PAGER (reflux.org). Both support groups were amazing! I volunteered with PAGER for a couple of years until I had a run in with breast cancer. I had to shift my focus to me for a while. Life truly changed 10 days after starting the caracream from MARCI- Kids. The screaming stopped, no more trips to the ER and no more lost voice. I kept him on the caracream until he was a little over three. We had a lot of work to do with his speech and eating but that was work I could handle. Ryan is almost 7 now. He still has small bouts of reflux when he goes through growing spurts but it is short lived and CVS Cherry Supreme is typically all he needs. He is a completely normal kid. He is a picky eater, but most kids are. So much of this journey is really about digging deep to find strength and courage you never knew you had. Time heals most things, including GERD. I would be lying if I did not admit that the aftermath of the 18 months from hell didn’t take it’s toll on the whole family, but that is life. Just keep going and you will find your way to the other side of this thing. Support each other and please take a break when you can.

May 4, 2015Understanding Reflux
FacebookshareTwittertweet
Nikki’s Advice: from premie NICU to med-free by 8 monthsTwins not Wanting to Eat, Not Gaining, and I found Zegerid