Sandifer’s Syndrome: Reflux Taken to the Next Level 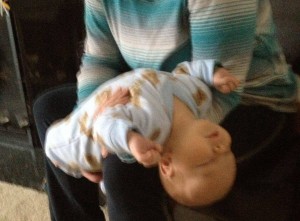 Sandifer’s Syndrome: Reflux Taken to the Next Level

Abstract: Sandifer syndrome, named after the neurologist Paul Sandifer, was first reported by M. Kinsbourne in 1962 who noticed a disorder of the upper gastrointestinal tract with neurological manifestations occurring in children and adolescents. Sandifer syndrome is a combination of gastro-oesophageal reflux disease with spastic torticollis and dystonic body movements with or without hiatal hernia. It is hypothesised that the positioning of the head provides relief from abdominal discomfort caused by acid reflux. The true pathophysiological mechanisms of the condition are still unclear. We report the diagnosis of Sandifer syndrome in a 9-year-old boy with a history of chronic torticollis and dystonic episodes for 5 years associated with abdominal symptoms. The cause of the dystonic body movements had not been found, although multiple neuropsychiatric diseases were suspected. The patient had been seen by many different specialities including Paediatrics, Paediatric Neurology, Psychology, Orthopaedic Surgery and ENT but the reason for the torticollis remained elusive. Unclear abdominal discomfort was the indication for an endoscopy that revealed severe gastro-oesophageal reflux disease with oesophagitis III degrees and a hiatal hernia which led to the correct diagnosis of Sandifer syndrome. After medical treatment and laparoscopic floppy Nissen fundoplication the symptoms nearly resolved 3 months after operation. Few reports of this syndrome exist, but Sandifer syndrome is probably underrecognised. Children with torticollis, dystonic episodes or atypical seizures should be evaluated for GERD and Sandifer syndrome.

Children who are administered pro-motility medications to treat their reflux may experience a side effect called acute dystonic reaction (ADR). Acute dystonic reactions are rigidity and/or spasmodic movements in one or more parts of the body.  The rigid body posturing seen in an ADR may also occur as a result of the reflux itself. Known as Sandifer’s syndrome, the abnormal postures are an infant’s attempt to find a position that relieves the discomfort caused by the reflux. An important distinction between Sandifer’s syndrome and an ADR is that infants with Sandifer’s syndrome control their movements, whereas infants experiencing an ADR cannot.

The involuntary spasms and rigidity seen in acute dystonic reactions coupled with the observation that infants may also seem unaware of their surroundings for minutes to hours often leads parents to believe their child is having seizures. The postures seen in Sandifer’s syndrome are also often mistaken as seizures.

Consequently, children who have reflux or are being treated with pro-motility drugs may be misdiagnosed as having a seizure disorder and incorrectly be prescribed anti-seizure medications. Some of these medications themselves cause acute dystonic reactions, which often leads to the mistaken assumption that the prescribed dosage is not controlling the seizures. The dosage is increased, the ADR persists, and the cycle continues without controlling the real problem–reflux.

REFLUX TAKEN TO THE NEXT LEVEL

Sandifer Syndrome is a pediatric disorder. It is characterized by spastic dyspositioning of the head, neck, torso and arms . We can also say it is reflux taken to the next level, the neurologic one. Most parents are scared to death once they notice, for, besides the misery they are used to, they now observe things that look like seizures. All the arching, cramping and squirming were already known, but once baby starts to roll up their eyes, and seems to be “gone” for 30 seconds or so, typically parents are beyond concerned. Most of them have been given the diagnosis “torticollis” already, usually explained by an pediatrician due to positioning in the womb, and think it is just another imperfection they battle. But, the rolling eyes upwards (opisthotonos), torticollis, and also dystonia, and possibly respiratory impairments, are in Sandifer syndrome typical, with symptoms of gastroesophageal reflux in causal connection.

The good news about it, the neurological exam will turn out fine. There is no neurological condition causing all this. The bad news is, baby is in a lot of pain. The pain is irritating their little brains so much, that we see these scary things in them. The evaluation and treatment of acid reflux is key here, in order to reverse Sandifer’s. Once the reflux is controlled, it will disappear and never come back.

Together with torticollis (which is a spasmodic one) there is the potential for their heads to develop plagio- or Brachycephaly, before you know it. This happens because during the time we battle reflux, and all the horrible symptoms of it, from birth to 4 months, babies’ heads are the softest as can be, and so vulnerable for deformation. Best thing is to carry baby upright all the time, (for example babywearing) because it helps reflux and avoids the head to lay always on the same spot, since they go into this dystonia position once laid down. But we are just humans, and need sleep, too (occasionally). So it happened to us, the damage was done by age 4 months, flat spot on the right backside of his head. It looked worriesome. Then he had a growth spurt, typical between 4 and 6 months, the head grew in the malformed way it already was, and it looked just awful. He developed a bulge on his forehead, diagonal to where the flat spot was on the back right side. And all of a sudden we were referred to a Neurosurgeon, because the pediatrician was shocked. The neurosurgeon did all his exams and they turned out good, and we discussed the whole complex of reflux and the other symptoms and finally had the diagnosis of Sandifer’s together. We had our son in a helmet for 3 months, and most of the deformation was resolved, but not all of it. It is only an cosmetic issue, if any. Since he grew more hair no one really can see it. The reflux was much harder to battle, but once we solved this, and he had his hiatal hernia surgically corrected, it all is well. He is a healthy firecracker now, almost two years old.

What can Parents Do?

Research!
Make sure your baby is PROPERLY Medicated!

PPIs: A Guide to Informed Decision-Making
March 2, 2020
Login to the forums
Welcome!