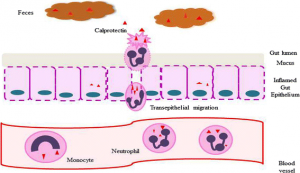 Calprotectin is used efficiently with adults to test for inflammation within the gastrointestinal tract. Calprotectin is a protein that is released by neutrophils, which are a type of white blood cells. These neutrophils respond to inflammation in different areas of the body and release Calprotectin. Typically this test is utilized in adults to check for Irritable Bowel Syndrome. This test alone will not give you answers to anything specific your child might be reacting to, only that the body is indeed reacting. It basically confirms what one already suspects.  Baby has a GI issue, but it doesn’t point to which GI issue.  This reaction could be due to some type of intolerance, excess acid production, gastroenteritis, or inflammatory bowel disease.

Anke T. writes:  It is an unspecified screening mostly for inflammation. Not only in the intestines, moreso the whole GI tract. If your results would be elevated this could be a number of things, from inflammation in the small intestine to a stomach ulcer to esophagitis. A high number in calprotectin usually leads to a repeat test 2 to 4 weeks later and if still high an EGD to specify which part of the GI tract is involved. If calprotectin returns as a low number, it is very unlikely there is any inflammation. 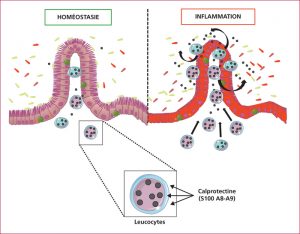 How is a Calprotectin Test Performed?

A gastroenterologist will ask that you submit a fecal sample, typically to a lab, where it will be sent off and tested to detect the presence of calprotectin. First stop by the lab with your paperwork (if given any) and pick up your collection cup.  I believe all labs suggest storing your child’s sample in the freezer until you can return the sample. After dropping off the sample your lab will either test there or send them out for results.

Sarah C. writes: No matter what your GI suggests, DO NOT take a poopy diaper in to the lab with you before going and getting the collection cup first!  I made this mistake when my daughter was an infant.  I had her in the carrier car seat, while also juggling a diaper bag and “sample”…walked right up to the desk to drop it off.  They looked at me like I was crazy!  I had to drag all of that stuff into the handicap stall of the closest bathroom and “transfer” the poop to the cup before taking it back.  It’s funny looking back on it now, but in that moment it was incredibly stressful!

Due to the immature GI tract of infants the ranges are not as set in stone as they are with adults. There are some research projects that indicate values are naturally higher at birth as the intestinal tract starts to populate with the correct levels of good bacterial growth.

“First, FC levels may be high in the first months of life due to ongoing developmental processes occurring in the digestive tract during this stage of life. A high calprotectin concentration in feces appears to be a normal phenomenon in infants and may be related to the immaturity of adaptive immunity in infancy.” (Fecal Calprotectin Concentrations in Healthy Children Aged 1-18 Months, 2015, #)

Conclusions from the above mentioned research study and others I’ve read with similar age and health data (yet other geographical locations) all state that infants from birth to six months of age have very high values that are their normal, then from six months to around four years of age the values are slightly higher than normal. After about four years the values are more similar to that of an adult. If you are interested in more research stating this please check out this research project (Davidson & Lock, 2016, #), after reading, scroll to the bottom and read other research projects that have also focused on trying to find the same answers.

So with the above understanding of what calprotectin is and the scales used to rate values at labs, it is very important to consider other symptoms and issues your infant or toddler is having. It can be easy at times to get tunnel vision and focus solely on ONE diagnosis, but it is imperative we look at our child’s situation as a whole.

If they are having signs of reflux or GERD, is it mechanical causes or actual intolerant causes? Duplicating this test after appropriately treating reflux would add insight to if there is a protein intolerant as theoretically the values would still be the higher ranges. If changing the child’s diet resolves the reflux or GERD, it will most likely also resolve some of the calprotectin dependent on the child’s age.

Sometimes these cells can be microscopic, so if any provider ever tells you since you can’t see it with a naked eye, it is not there, GET A SECOND OPINION or insist that they run the test anyway. Some doctors’ offices can look under a microscope on a slide with a sample, some have test kits and others do not do this in the office but can give you a lab slip. Again, go to the lab first and pick up any needed supplies and instructions.

Mucus in Fecal Matter; It’s Not What You Think!

When we think of mucus typically we think of what we cough up or blow into a tissue when we are sick. So thick that you can’t see through it and/or it has a color to it. That is not really what mucus in fecal matter will look like.

First let’s talk about what healthy poop should look like, it should be similar to the consistency of toothpaste, maybe peanut butter (sorry!). It should be MATTE, as in flat paint from the hardware store, as in MATTE nail polish, or primer grey on a vehicle. There should be NO sheen, shine or light reflecting from it.

If there is a shine, a sheen, or looks glossy there is most definitely mucus in the fecal matter. If you take the fecal matter and press it together and when you pull it apart it is tacky, sticks to itself, or looks stringy, that is a byproduct of mucus, which is caused by inflammation. From there it can become MORE noticeable where there are strings of mucus or globs of areas that appear to be more see through and very shiny. The viscosity/stickiness of this mucus is more similar to that of egg whites.

For more information about what poop should and should not look like, check out THE Poop Post HERE!