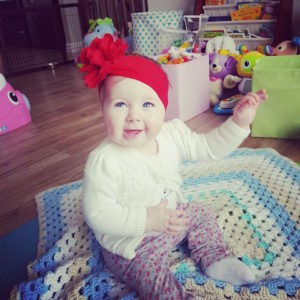 I wanted to share our real and raw reflux journey in hopes of sheding light to others that it can get better. This is something I wrote today and I hope others can relate. I also want to thank the many members of this group [infantreflux fb group, Infant Reflux: Support for Gerdlings] that helped us get to this point. (Mandy B., 4/17)

The screams of my baby were something I had never experienced before and, over time, they eventually became the screams of me, the screams inside my head, as I held my wailing baby; the screams exploding from me as my husband held our baby and watched in horror as I clung to the dining room table leg for dear life. As if clinging to that table leg was going to save me from this horror I was living, and stop me from being engulfed into the kitchen floor.

As a first time mother, a mother who had watched her baby refuse to eat and cry herself to sleep, I was broken, but fighting: fighting to keep my sanity, so I could keep fighting to help my precious baby.
As soon as baby Annalise Iris was born, she spent the nights at the hospital crying. Days, she slept, so we were told she simply had her days and nights mixed up….fine. Once we arrived home, she fed every hour, day and night, and she pooped constantly: explosive and acidic poops. We were told ‘this is normal…’ okay.

By two and a half weeks old, she changed. It was like a switch flipped in my beautiful child and the normal newborn behavior excelled to the point where she screamed and simply screamed some more. Nothing made her sleep. My husband and I would take turns rocking and swaying in the bathroom; with the shower running, for hours at a time. After 4 hours she would finally sleep on my chest while I laid on the couch. Peaceful experience? Laying snuggled with your new baby on your chest? No. To keep her asleep required constant shushing and jiggling while she grimaced in pain in her sleep.
Each checkup with our family doctor went fine. Feeding issues were brought up and dismissed with: colic, babies cry, first time parents.

4 weeks old we brought her to the emergency room, after a six (6) hour Screaming Marathon. Wracked with anxiety and shaking from lack of sleep and nutrition, I walked my baby into the emergency room where a doctor watched her attempt to eat. She screamed, she clenched her fists, she arched her back and the doctor said ‘reflux.’ We said, ‘but she doesn’t spit up.’ She said ‘silent.’ How could something be more of an oxymoron? Silent reflux equals screaming.

We tried medication, which worked for a day and then made her scream more, so we stopped. We switched to liquid zantac. It worked some; I had a baby whom I could convince to eat, instead of fully refusing all bottles. And, by convince to eat, I mean bouncing while I held her vertical in my arms while vibrating my lips to distract her from the pain she was surely suffering.

By the end I was dripping in sweat, but this was progress. Zantac is a very weight sensitive drug, so we continued to increase. We increased beyond doctor dosages to find relief for our child. Eventually zantac stopped working.
We scrambled every waking moment to feed our child. Meticulously tallied up every half an ounce she ingested from either bottle, sippy cup or syringe, desperately trying to get enough in her for her to continue to gain weight and meet her milestones.

She got to the point where she only drank while sleeping. My husband, who slept on the floor by her crib, to shush her through her constant night wakings, would feed her 4-5 times a night, so she would consume 18 ounces. The doctors told us, good, as long as she is eating. We looked at them through puffy eyes growing bags in pure dismay.

Proper medication. We receive the prescription and feel relieved. Finally our baby will have relief. We will get to experience parenthood the way others do. Proper medication is then underdosed. Full bottle refusal, no food for 48 hours, more emergency room visits, more breakdowns and tears from us all.
Again we took measures into our own hands. Increased the dose then told the doctor and she agreed. Increased again, told the doctor and again agreed until we were triple the original dosage and 3 weeks in and finally our sweet baby was eating! I cried tears of relief. She sucked back so many bottles before and after every nap! We had a child that could eat for the first time in her life. We could feed her and then not have to think about feeding her again for another few hours. The constant bouncing and shushing and vibrating could stop.

We changed medications and went through the whole bottle refusal, no eating all over again. On day 13, she increased her feeds a little and gradually continued to do so. Sleep also improved, no more shots of electricity jolting her awake. We cautiously breathed a sigh of relief.

Reflux. Sounds simple enough. Classic heartburn right? Every baby has it to some degree. Every adult eats a spicy meal from time to time and suffers. No big deal right? Until you, as a mother, watch your baby scream when they are hungry but can’t eat. Until you hold them as they cry themselves to sleep because you couldn’t feed them before bed….again. Until you cradle them in the wrap you wear day in and day out because it’s the only place they feel comfortable enough to sleep. Until you sit up with them lying on your chest everyday for 7 months because it’s the only way they find relief. Until you see the pain in your husbands eyes as he holds your child and watches you break because you can’t handle being on the end of another bottle refused or bounce on a yoga ball in a dark room for one more second. Until you experience all of this you will not understand the true implications of a child with silent reflux.

Reflux is loud. Reflux is screaming by all involved. Reflux is tears and reflux is breaking and then reflux is looking into your daughter’s eyes and finding the strength to put yourself back together and to pursue on to find answers and get through another day.