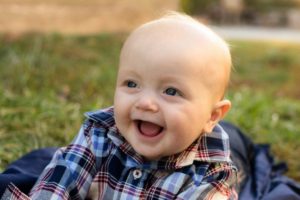 Tyler was born April 1st, 2017.  I was in labor for 48 hours and because I tested positive for GBS, I ended up receiving 11 rounds of antibiotics. He had reflux from birth. While we were still in the hospital, the nurses and doctors said that his spitting up was due to taking in some amniotic fluid during delivery. It didn’t stop there, but wasn’t a huge issue for the first 5 weeks of his life.  At 5.5 weeks of age, Tyler developed a high fever and was admitting for testing. He received spinal taps (yes, plural… none of the four they performed were successful), catheters to collect urine, and blood draws to make sure he didn’t have an infection.  While waiting 48 hours for the test results to return, he was put on two different kinds of antibiotics just in case he were to have something serious, like meningitis. He was hospitalized for two days and it was determined that he had simply caught a viral cold from his big sister. I am convinced that the antibiotics he received while admitted are what started our journey.

Upon arriving home, Tyler’s reflux was worse than ever.  He was spitting up 20-30 times each day in varying amounts.  Some were small, but many were large in volume and projectile in nature.  It worse after feeding. This is also when the mucous in his stool began.  I researched and found the Infant Reflux facebook group. I knew that the mucous was NOT normal.  He also had a rash that I was told was either eczema or baby acne. Despite countless people telling me that the reflux was normal, that he would eventually outgrow it, that it was just something I needed to deal with, that he didn’t need medicine, etc., I just had a gut feeling that it wasn’t just reflux.  My research told me, even though I didn’t want to hear it, that my diet would most likely need to change.  The biggest culprit with food related reflux problems is dairy and, 50% of those who have dairy intolerances, will also have soy intolerances.

At 8 weeks, I cut out all dairy.  It was hard… I LOVE cheese and ice cream and pretty much everything dairy. Pizza is life.  After two days of being dairy free, Tyler’s rash cleared up and his skin has looked perfect since then (with the exception of drooling/teething causing small rashes around his mouth).

Less than one week later, Tyler had his two month check up.  I brought up these new issues at the appointment and the nurse practitioner we met with prescribed Zantac. She brushed off my findings and thoughts about my diet, she said the mucous was within the normal range of baby diapers. My gut told me otherwise, but I nodded my head in agreement and then went home to research some more. The Zantac helped with the pain of the reflux, as Tyler stopped fighting his feeds, and I didn’t have to dream feed to get him to eat.

Over the next month, I cut out soy, then eggs, and then nuts. During this time, Tyler’s Zantac dosage was increased.  His reflux only got worse and he began to fight his feeds with a passion.  The only way to get him to eat was to dream feed.  I spent a majority of my days rocking him to sleep, nursing him while sleeping, then holding him upright for 30-45 minutes afterwards.  It was an endless cycle. Despite several dosage increases, the Zantac was no longer doing its job. I talked with his doctor again and we agreed that it was time for a PPI using proper dosing.  The first round of PPI was compounded at the pharmacy.  The cost of the PPI was going to be something we knew we could not afford due to the fact that it would have to be compounded every 10 days.  After that first round, I went rogue and began home compounding Tyler’s medicine (he was 4.5 months at the time).  It is much cheaper out of pocket (<$6/week vs. ~$30/week from the pharmacy) and it is second nature now; I am soo very glad that we took the leap.  He is a happy boy and eats like a champ with no more fighting his feeds. (He is now 8.5 months).

It was suggested to me by several members of the reflux group, that I go full TED.  The thought of doing a Total Elimination Diet absolutely terrified me.  If I thought that going Dairy Free, Soy Free, Egg Free, etc. was hard…. Going full TED seemed impossible.  When I continued to see Tyler suffer despite my previous attempts at a diet change, I spoke with his doctor again.  They suggested that I give him formula for a few weeks so that his gut could rest.  This didn’t sit well with me and after one bottle of refused formula, I went full on TED when he was 3.5 months old.

At first, it was a daily struggle.  I was eating what felt like nothing and was getting nowhere. I cried all the time.  I was making a huge sacrifice and yet my baby was still suffering. The emotional battle during the first month was intense and I wanted to quit many times each day.  I didn’t though… I stuck with it and I’m so glad that I am unbelievably stubborn.

I started out eating chicken, sweet potatoes, rice, carrots, yellow squash, zucchini, and grapes. Two weeks later when I saw no improvement, I substituted quinoa for rice. The next change was to substitute white potatoes for sweet potatoes, and finally I cut quinoa.

One month after starting the TED and making several changes, we finally got out first baseline diaper. It felt like the biggest victory I’ve ever experienced.

We’re now 5 months into the strictest diet I’ve ever been on.  It is still hard, so I definitely won’t sugar-coat it.  However, it is so much easier knowing that what I am doing is helping my sweet boy.  I am up to 11 foods.  We started Tyler on solids at 7 months and he has done amazing with them.  He is up to 4 safe foods at 8 months and we’re adding in another this weekend. He is such a happy fella’ and I would do it all over again for him. Of course, hindsight is 20/20 and there are many things I wish I would have known when I first started out…