Difference Between Allergy and Intolerance 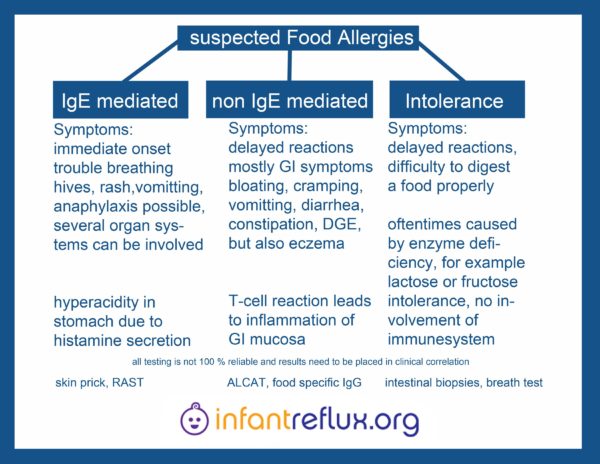 The other type of allergy is less obvious, and the symptoms can appear many hours (even days) after exposure. This type of allergy, non IgE mediated food allergy (which also used to, up to very recently, be referred to as an intolerance or IgG intolerance) can present with many different symptoms, and the symptoms can vary from person to person.  These present with delayed reactions and mostly manifest with inflammation in (gastrointestinal) tissue. It may take up to 72 hours after consumption of the food for symptoms to be observed.  Symptoms can vary widely. Some examples: stomach pain, gas, cramping, eczema, delayed gastric emptying, diarrhea and/or constipation.  Other symptoms may include: nasal congestion, wheezing or asthma type symptoms, congestion in the ears often leading to recurrent ear infections, and eczema. In some children, non IgE mediated food allergies  can cause brain inflammation resulting in behavioural issues resembling ADHD and autism.  Many allergists are still using the older terminology of “IgG intolerances” aren’t even aware of this new terminology. 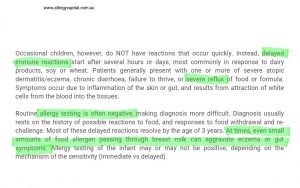 Testing for Allergies and Intolerances

Skin testing (and RAST testing) shows the body’s IgE immune response, which is an immediate reaction within the body.  The most common symptoms of IgE allergies include rash, hives, swelling of mouth/face/throat, anaphylaxis, etc.  Skin testing is supposed to be very accurate in testing for IgE mediated allergic responses.  RAST isn’t known to be quite as accurate.
It is not uncommon for a child to undergo allergy testing (which is 99.9% of the time IgE testing) and have the result show no allergy to milk, casein, soy or gluten. However, when these foods are eliminated from their diet, they then have improvement of symptoms (like less ear infections, or clearing of eczema). The reason for this would be that the allergy is an non IgE mediated food allergy, not IgE, so it didn’t show up on the test. Often it is easiest to do a trial of removing the suspected food from the diet to see if the symptoms improve.
For anyone suspecting milk problems and traditional skin prick testing (or RAST testing) doesn’t show anything, it is best to do a 6 week completely milk-free trial, then do a milk challenge to see if symptoms show up.  If you do this, you would have to be 100% milk free–no hidden dairy in breads, crackers, baked goods, margarine, sauces, soups, salad dressing, chocolate, etc. and obviously no milk, cheese, ice cream, etc.  There are a lot of great milk substitutes you could use during this period, but it’s best to avoid all animal milk, including goat’s milk, since it contains casein as well.  After 6 weeks of going dairy free, you would then reintroduce some milk products and watch for a reaction.  Remember, the reaction could take a few days to show up.  This is traditionally the best indicator of non IgE mediated food allergy.
Please read: Food Allergies and Testing for a more in-depth explanation.

Unfortunately most allergists do not think outside the box; if it’s not something they can see physically, like on the skin prick test, then it can’t be related to allergies of any sort.  In their mind, there’s just no possibility that non IgE mediated food allergies can produce unseen effects on the body and brain.  Also, it’s such new and cutting-edge research that the information isn’t widely known or accepted yet.  Since non IgE mediated food allergies produce delayed effects (could be 8 hours later, could be 3 days later) it’s hard to link the two. However, since IgE allergies produce immediate effects it is easy to see, test, and prove.

Currently there is a lot of emerging evidence and new research showing that the body can also have non IgE mediated  immune reactions to foods. This is still  not widely accepted by allergists. Non IgE mediated allergy immune reactions (some continue to call these “allergies”, some continue to call them “intolerances”) are delayed, and are therefore hard to determine.  They can take hours to days to show up.  This means your child could be having runny nose, irritability, sleep problems, etc. today, but that could be due to a food that they ate today, yesterday, or the day before.  Very common non IgE mediated reactions to milk (usually to the proteins casein or whey) include runny nose, chronic ear infections, dark circles under the eyes (a.k.a. allergic shiners), eczema, changes in bowel movements (usually to either extreme: loose stools – about 75% of kids, or constipation – about 25% of kids), and sleep problems (difficulty falling asleep, or night waking).  Kids can also be overall irritable, cranky, oppositional, etc.
However, there are labs that perform food specific IgG testing methods (sometimes called ELISA testing), but this would likely be an out of pocket expense, since non IgE mediated allergy is just now becoming more widely recognized and accepted by the majority of the medical community.  There are only a few labs in North America that do this type of testing, so you would likely have to have a local doctor order the test, have a local lab draw the blood (it’s only 1 vial) then have the serum shipped to the lab doing the testing.  The one drawback to food specific IgG testing methods, is that the IgG antibodies will only be present if the person is currently eating the food in their diet.  So if someone is 100% milk free, for example, the IgG response to milk would likely be negligible or nonexistent.  Some would really only recommend food specific IgG testing methods if the child has serious behavioral and sleep issues (for example kids with diagnosed or suspected autistic spectrum disorders, ADHD, severe sensory integration disorders, etc.).  Another reason to try food specific IgG testing methods, is if there’s been extensive food eliminations and one wants to know if all their ‘safes’ are really ‘safe;’ food specific IgG testing methods may help provide more answers. Most often, a food challenge is usually the easiest and best determinant of non IgE mediated allergies.  “ALCAT/MRT does test for some specific IgG, but also tests for inflammatory markers as well.”
Great Plains Laboratory in Lenexa, Kansas does food specific IgG testing.  In one case, a child showed no reaction for milk, soy, wheat, egg, etc. via skin testing (IgE) but did show a significant reaction to those, and other foods, on food specific IgG testing.  Since removing these foods, and others that showed a moderate to high reaction on the food specific IgG testing, his parents were able to see a world of difference in him–especially in his behavior and sensory integration issues!  He is a much happier boy; he’s not constantly irritable, does not have any more daily tantrums, etc.
There is a yet another possibility left if a child doesn’t tolerate a food well. That would be an intolerance. An intolerance should not be confused with non IgE mediated allergies, since an intolerance differs by the immune system not having any role in it.  It is basically what it is, the child does not tolerate a food well.  There is no testing method for this available, only empirical methods of data collection may provide relief, like keeping a food journal.

How does all of this connect specifically to reflux?

The allergies/sensitivities lead to the release of tissue histamine which stimulates acid pumps to become active and make acid. They can cause indigestion, slowed or increased bowel transit. Intolerances are not absolute (meaning that a tiny bit causes an equal reaction to a larger amount). Allergies of the immediate hypersensitivity type are triggered by a small or large amount of the trigger food equally. Intolerances can be dose related. Tiny doses may not even be noticed by the body and larger doses create the symptoms.  However, these tiny intolerance doses may accumulate over time and cause what we refer to as a build-up reaction (the “bucket” theory). 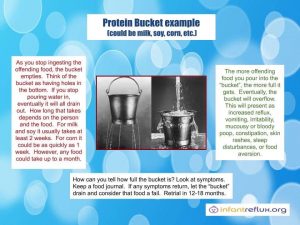 Anke T. writes: In infants most of the time we do not see IgE mediated allergies so much; that would be immediate reaction with potential for anaphylaxis and a positive IgE blood result for a trigger such as cows milk protein. That is the “no brainer;” it’s obvious when this is the case that Baby can’t have cows milk. But what we see way more often is non IgE mediated allergies, which result in a delayed reaction presenting with tissue inflammation (in GI tract, either accompanied by skin eczema or only noticeable by GI symptoms). These in fact may also build up over time, once the body has enough quantity of the allergen consumed the symptoms set in then increase. The disposition was there since birth, so we do not “trigger” it with the wrong formula or so, but we notice late sometimes. This can be outgrown once the child is older, but for quite some time it will be best to avoid cows milk protein, or any other allergen that caused these reactions.  It’s type IV in Gells and Coomb classification, a T-cell reaction in tissue. Many doctors are unaware of this, since for them only the “real deal” (IgE allergy with anaphylaxis) seem to exist.

What about other foods causing reflux?

Does ingesting foods with acid content (fruits etc) increase the acid content in the stomach or is it just irritating to the baby due to the damage that already exists?  Acids from fruits, some veggies, etc are not really strong enough to do any harm. They aren’t even strong enough acids (with a few exceptions such as orange juice, spaghetti sauce, lemon or lime juice – which hopefully nobody is giving than infant) – to damage already damaged mucosa.