The ‘common google’ definition is being used here, in order to have a neutral statement from which to start.  Currently, this condition is not very well understood, and there is a ton of unreliable misinformation swirling around the internet and in Facebook groups. In the past twenty years, the numbers of newly diagnosed cases of EoE has increased. It is not certain if this is a true increase in actual cases of the disease, or if the increase is due to the much higher frequency that diagnostic procedures, specifically the EGD, are being ordered by doctors.

The standards to diagnose EoE were set in the late 1990’s. In order to diagnose EoE, biopsies need to be taken from the esophagus. The visual impression of the esophagus through the scope alone is not enough to rule out or diagnose EoE.  Eosinophil cells themselves are not visible to the eye through the camera of the scope. Tissue samples need to be collected and prepared under a microscope, so the pathologist can see them. There can also be further evidence of EoE, found much later on, for example alterations in mucosa, like rings or furrowing – these are not established in the very early stages of EoE.

The diagnosis of EoE consists of three parts. The first part is eosinophilia, which means infiltration of eosinophils  (eosinophils are a subclass of white blood cells) into inflamed esophageal mucosa. The number of these eosinophils is given in HPF (High Power Field, the field of vision the pathologist sees when looking through his microscope at a tissue sample). There are no eosinophils in a healthy esophagus, so the number should be 0. Eosinophils will develop though, when they are activated by either an immune system response to allergens, or from being exposed, over time,  to the acid from reflux and GERD which causes inflammation. In some cases, it is difficult to distinguish what exactly has caused the eosinophilia. To consider EoE, the cut off is a finding of > 15 HPF.  But, not every case with eosinophilia > 15 HPF is automatically EoE; it also depends on the density of the eosinophils, meaning if they present clustered or scattered. Usually, if the pathologist sees a presentation of eosinophilia with a count/number that could be consistent with EoE, he will write this as a comment in the report. After evaluating esophageal dysfunction and ruling out other causes for eosinophilia, such as GERD, the doctor who ordered the biopsies will then make the final diagnosis of EoE.

In some cases it is a huge challenge to differentiate between GERD and EoE, since eosinophilia can also be caused by gastroesophageal reflux. This kind of eosinophilia does respond to using a Proton Pump Inhibitor (PPI), and, for this reason, many physicians order the biopsies only when a properly dosed PPI treatment was carried out for at least 6 weeks prior to the biopsies being taken. For a period of time in the past, this was a seemingly secure measure to differentiate between the presence of eosinophilia being caused by GERD or EoE.  However, recently another subclass of EoE was identified: PPI-responsive EoE. Up until this subclass was identified, it was thought that only the eosinophilia caused by GERD responded to PPI treatment. PPI-responsive EoE really makes up only a very small fraction of EoE cases, but needs to be kept in mind for the diagnosis of GERD.  So, while for a number of years it was an official guideline to only test for EoE when PPI treatment was in place prior to testing, this protocol now has been ‘taken back’ somewhat. It is the decision of the doctor who is ordering the EGD to make the determination of whether or not his patient being on a PPI prior to the patient’s EGD will be helpful in order to make a diagnosis.

The younger the patient, the more difficult it is to determine if a true case of EoE exists, or, if there is GERD, as the symptoms of the two may be almost identical. It is impossible to diagnose EoE by symptoms.  GERD, however, may be diagnosed by symptoms. The fact that mixed forms of EoE are possible is not helpful, either. Infants are frequently bothered by GERD symptoms and a diagnosis of GERD can be reexamined, as EoE symptoms can develop as the infant grows older. An example of a symptom in someone ‘older’  is food impaction, which occurs when food becomes stuck in the esophagus. Food impaction will never happen in the early stages of EoE. Dysphagia, the medical term for swallowing difficulties, along with the presence of rings and furrowing, the scarring inside the esophagus, all this takes a certain amount of time to develop.  Therefore, if an infant displays EoE symptoms, he most likely will present with ‘basic reflux/GERD’ symptoms such as throwing up repeatedly, but even a symptom such as this may have other causes. Symptoms for EoE in an infant are very unspecific and impossible to diagnose based on symptoms alone. (Even in adults, a diagnosis cannot be made without taking biopsies and then finding conclusive EoE results from them.)

It may take the first year of life for an infant to establish EoE, but it’s not impossible to present with it earlier. It usually is detected when desperate parents follow the recommendation to have an EGD done, after several months of unsuccessful attempts to manage reflux and GERD.  The biopsies taken from the esophagus, stomach and small intestine during an EGD are supposed to rule out a number of things. When the results of the biopsies come back after an EGD, this is when parents hear about EoE for the first time, as a coincidental finding.

EoE is considered, and classified as, a chronic disease. For infants, there may be a chance to ‘get over it’, but this does not mean the infant is cured.  The immune system plays a major role in the whole condition. The immune system continues to develop through age 7, or older, and as it develops and strengthens, there may be chances for the child to go into permanent remission. The younger the child, the more present reflux is, and oftentimes reflux is just that: reflux, which can be outgrown. There very well may be a number of cases diagnosed as EoE at a very young age, due to the presence of eosinophilia, which in fact were not true cases of EoE;  it was GERD that caused the eosinophilia. So, as these children outgrow GERD, the eosinophils will disappear, too. This does not mean they are cured from EoE, it only means they never really had it in the first place.

The presence of eosinophilia in esophageal tissue can be caused by food sensitivities, classified type IV, after the Gell and Coombs system. These foods are considered trigger foods and need to be eliminated. There is no way in conventional medicine to test for these. However, functional doctors consider food- IgG tests or commercial food sensitivity tests helpful (one such example is the MRT). Even though EoE is not caused by IgE allergies, most patients do show some IgE allergies, and it is the first step to identify and eliminate these. Food triggers are usually one or several of the top 8 food allergens, regardless if they show as IgE allergies in testing or not. Environmental allergies may play a role too, as certain allergens (pollen for example) may get in contact with the patient’s mouth and swallowed.

In infants with an EoE diagnosis it is advised for them to go on an elemental diet right away, and not to bother with allergy testing just yet. The first recommendation is for the infant to have an amino acid based infant formula as their primary source of nutrition, and then progress will be monitored from there. With toddlers and older children, it is necessary to eliminate obvious allergens from their diet. It necessary to treat the child empirically, meaning  treatment is based on a clinical “educated guesses” in the absence of complete or perfect information. Usually doctors insist on the child having a follow up EGD with biopsies, in order to monitor progress in terms of HPF numbers. In order to keep the frequency of scopes low, because it is an invasive procedure and in a way mentally traumatic for children and oftentimes parents too, it is crucial to keep and follow dietary instructions meticulously. The better this is managed, the more progress is shown in terms of an overall better state of the child, with the child displaying fewer GERD symptoms, showing weight gain and an showing an improvement in sleep. Most cases require additional medication too, but this will only address the symptomas; medication is not a cure. A PPI can be chosen in order to help alleviate some of the symptoms. For some cases of EoE, a PPI is not helpful. Topical steroids to be swallowed, like budenoiside will oftentimes be suggested by the doctor. Topical steroids reduce the immune response and heal the tissue, but the downside is that these are known to make patients very prone to develop thrush. Some patients experience benefits from anti allergy medications like Zyrtec or Singulair.

A major component of treatment is to never expect to have a solution or a treatment plan in place that will solve the problem. This is something that can only be treated step by step, as the immune system is still developing and every child is different. We can only recommend for parents to get as educated as possible, and take into consideration all aspects  that may make their children better. Never trust a doctor blindly, or rely on them that they will make this all better. They really do try, but at the end of the day, it is even harder for them as they don ́t see the child every day; they don’t know what the child’s symptoms are truly like, as they only see a fraction of them. Listen to your doctors and get help from them. But, never forget you are the advocate when it comes to your children’s health; you know your child better than anyone and know things that the doctor simply does not. Parents play a major role in treatment of EoE which cannot be replaced by a medical provider. Parents need to pay special attention and put effort into figuring out diet. And once they do, it is imperative that they follow the diet strictly. Parents of older children also need to work with schools, and request a 504 plan when necessary. 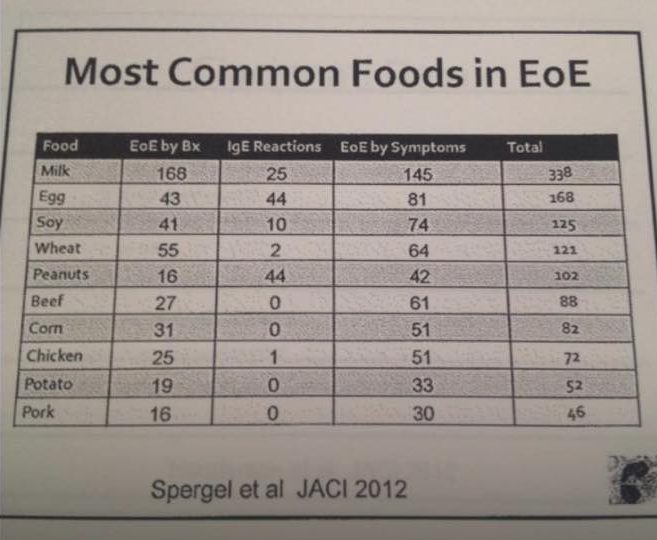