What Led Me to Mixing it Up at Home 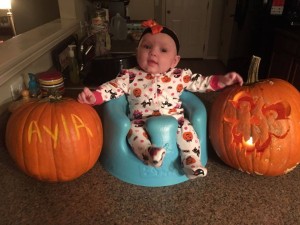 “I’m sorry I haven’t been on in a few weeks!! After starting my daughter on the home compound of zegrid and Omeprazole on October 11th so she’s been on it about 20 days now!! And oh my word, no more screaming fits, barley any crying, barely any episodes and if she does there tiny and she fusses just for a second. We’ve seen a 100% turnaround and we have a very very happy thriving baby now!!”

September 13, 2015: This is where Laci posted the beginning of her story, in a closed Facebook Group.

“Anyone have any tips on severe acid reflux in infants? My baby has been on zantac since she was about 5 days old. She’s now 8 weeks and been put thru the ringer.. We’ve had her on several different formulas and now finally have her on similac alimentum ready to feed and she’s actually keeping that down. But over the past two weeks her reflux has gotten so much worse, especially over the past week. My poor little girl will have a episode where it comes out of her mouth and her nose and she stops breathing, turns colors and starts gasping for air because she’s choking and it hurts her. We finally will get her to breathe and it’s over. We got her on Prevacid Friday, and I’m sure it’s going to take a few days to work but I’m worried about her. We took her to the ER tonight because she did it three times within a hour and her chest was rattling. They said her lungs had some fluid in it but there wasn’t really anything they could do. But they suggested us taking her to little Rock arkansas children’s hospital. Because if she keeps having these episodes where she stops breathing it could cause major brain damage.. At this point I’m so drained and I have no clue what to do… Any suggestions!?” [the replies to this are in the link above]

You can read about how the medications like pepcid seem to only work for about two weeks: https://www.infantreflux.org/so-youre-just-starting-out/

September 17, 2015 Her baby wound up in the hospital, as she brought her to the Emergency Room! They kept her baby girl overnight.

“Advice please!! So my little one was born 5 weeks early at 6 pounds. She’s now 9 weeks weighing 11.8 ounces, so she’s gaining weight good! Ayla was diagnosed with reflux at about 5 days old and was on zantac. She’s now on similac alimentum ready to feed and Prevacid 2.5ml twice daily! She’s went from only spitting up clear liquid to now she’s spitting up a lot of bottle. When she has these episodes she screams, turns red, holds her breath, and starts gasping for air. Monday we had her in the ER and we stayed overnight. They referred us to the children’s hospital in little Rock to see a Gi specialist but she won’t be seen until FEBRUARY!! Her pediatrician advised us just to drive the three hours down there and take her to the ER there and they would have to see her, admit her and get her seen by a specialist! What would you ladies do?” [the replies to this are in the link above]

September 19, 2015: There was some discussion about First brand compound and how the number one thing she needed to do was get a proper dose and then get the First refilled every two weeks, at the very least. Some do actually get the First Kits prescribed ‘properly.’  A First brand Kit is prescribed by doctor for pharmacist to use to make compound using either omeprazole or lansoprazole. This is a wonderful option IF it can be prescribed to be refilled every ten (10) days.  This can be difficult, as most pharmacists believe that the First brand kits are stable for thirty (30) days and this just is not so (the company that produces the First brand kits states this). Here is a study to show that it the compounded PPI is stable for +/- 10 days: Stability of Extemporaneously Prepared Lansoprazole Suspension at Two Temperatures.

“So my little girl was in children’s Sep 17-22  just being watched, she was diagnosed with reflux and Gerd .. She was switched to neocate: https://www.infantreflux.org/elemental-transition/

It comes up even more and she chokes on it. [next step is a SLP to check for suck/swallow coordination and to check for aspiration] I have my concerns though.

Here is the article about How Elemental Formulas Work: https://www.infantreflux.org/forums/topic/misconceptions-neocateelecare/

“What’s next? 🙁  [Almost 100% of the time the successful approach to infant reflux/GERD is both diet and medication, BOTH.]
We’ve tried regular similac advanced, similac sensitive, Gerber soothe, gentle and soy… We did similac alimentum, elecare and now neocate… She’s done well on neocate for three weeks she had only had two reflux episodes in two weeks! . But we’ve seen a drastic decline again. Last week it started getting bad again, this week it has full force came back. She’s puking up every bottle. We have a GI appointment tomorrow for a consult but thats it 🙁 she’s lost 10 ounces since last week… She’s on prilosec and neocate, is there any other formula??”  Formula Feeding and Reflux

“Bethanechol (Urecholine) prescription… My Daughters GI doctor prescribed it to her today, it’s a antibiotic she takes 4 times a day as long as she has reflux issues… Anyone ever heard of this medicine?”

Bethanechol was explained and she decided not to put her baby on this drug.

PPIs: A Guide to Informed Decision-Making

“OK everyone, I’m ready for my little girl to feel better, doctors won’t up her prilosec dosing so I’m ready to start proper dosing!! Right now she is taking 1.5ml of prilosec compound twice a day and it’s just not cutting it!!  She’s 6 kilos, 12 weeks old! I need the break down of how much to give her every dose, how many times a day? And how do I make it since the doctors won’t prescribe us anything higher? I’ve read all the instructions but I’m just not understanding it.  I’ve got omeprazole delayed release capsules 20mg what else do I need?”

We love love probiotic drops, it’s helped out little girl with her reflux/Gerd issue alot!! And now she’s less fussy and has bm everyday!
The Gerber soothe and the biogaia drops are the same exact thing for the same exact price!! BUT Gerber is a 25 day supply vs biogaia is a 50 day supply! I contacted the manufacturer and the only reason Gerber gets away with making it the same price with less drops is because they trow the word “colic” on there for marketing! So of course parents usually go for that one, and overlook the biogaia.. Which plainly says on the Gerber soothe colic drops box, biogaia probiotic! Just thought I’d let you ladies know! And they told me they were dairy and soy free!

[Related Page: Click here to read the advice given to a disheartened mother who must wait too long to be seen by a Ped GI]