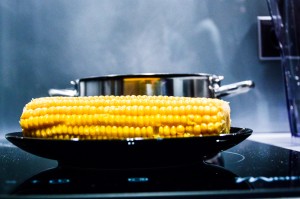 Trying to find reflux drugs that are ‘free of corn’

Often the discussion comes up over the level of corn in the different Over the Counter (OTC)  Proton Pump Inhibitors (PPIs)  available for infants.

For those with a known corn intolerance or corn allergy, it is obvious that the first recommendation would be custom compounding and no OTC is free of corn or corn derivatives.

From my research into the issue, only Prevacid (lansoprazole) and Prilosec (omeprazole) can be compounded to be corn free, as the active drug can be manufactured without corn or corn derivatives in the process.

Nexium (esomeprazole) (based on a phone call with AstraZeneca by myself and my compounding pharmacy) cannot be compounded corn-free, as they use corn or corn derivatives in the production of the active drug.

This post is simply to provide details given to me by the manufacturers of Prilosec (AstraZeneca) and Prevacid (Takeda) and their OTC formulations. This question comes up frequently, as many new to this allergy either want to find a cost effective solution, or they want to follow what is called ‘Marci-dosing‘ where they need to give higher doses than what can be prescribed by their doctor (limiting custom compounding options, because they need a prescription for this).

The purpose of this is to not debate the effectiveness of PPIs or the judge the dosing variations, but to explain why just saying ‘custom compound!” doesn’t work.

Additionally, I was frustrated yesterday regarding the external testing done on Prevacid and Prilosec OTC where it was found that they [OTC Prevacid and OTC Prilosec] had ‘no traces of corn’ [see below for more on this]. Thus, I felt the best way to follow up was to re-call the companies of the OTC products to get the most up to date information.
Prevacid OTC: Called Takeda on 4/7/16. They also sent me the attached images, as a follow up to their conversation.

Image three has most of the details, under the ‘plants and nuts’ section.

Prilosec OTC: Called Astra Zeneca on 4/8/16. They were far less specific and stated that they cannot guarantee that no corn protein or corn derivatives are in Prilosec. They do not keep track of their suppliers or their sourcing and they also change them frequently. When I specifically asked for more details on the source of their dextrose, citric acid, mannitol, cellulose, sugar spheres and xantham gum, I was told (after they did more searching) that they could not provide any details on how those items were sourced or if any corn protein or corn derivatives were used in their production. They then offered me a free sample (ha!). No follow up document provided.

Thus, this very long post to say that anyone who saw the statement that Prevacid OTC and Prilosec OTC are free of all traces of corn, please counter this statement with the information provided by the companies above when trying to find safe choices for your infant or child. Custom compounding is safest!

Nexium (the pure drug before you even get to the inactive ingredients) contains corn derivatives. I was told this straight from the company. Our compounding pharmacy also confirmed this and said it was a no-go.

My daughter does well on Alimentum RTF but is very sensitive to corn in medications (we are corn and dairy free). We did lots of searching for PPIs and ultimately, we had the best success with having it custom compounded at a specialty pharmacy (this is the one we use: http://www.naturalcompounder.com/ ). With our insurance, we pay $50 a month (including shipping) for her PPI.

The only two ppis that can be compounded corn-free are omeprazole and lansoprazole. This is because the base drugs can be supplied ‘pure’ and they can then add buffers to it that are safe for you.

When looking at the OTC versions of these two drugs (I removed Nexium from consideration, because the base drug is bound to corn derivatives in production, thus, will always have corn associated with it—I was so bummed when the company told me this), the capsules are not the most corn-y part. The enteric coatings all contain items that could mean corn.

For Prevacid, delayed release capsules, ingredients in the coating that would cause a reaction in my daughter are cellulose and ‘starch’.  I called the company (see above) to see what starch it is and learned the capsules contain corn starch.  For their solutabs, concerning ingredients are: mannitol, cellular, citric acid, and artificial strawberry flavor.  See above where I learned the mannitol (may be from corn) and the dextrose (definitively from corn).

Because I was starting to doubt my own sanity, I called Takeda Pharmaceutical to ask about corn derivatives in both of their Prevacid products. I did this two years ago when trying to figure out why my daughter was reacting and I recalled them stating that there were corn derivatives. Dr. P mentioned below that their independent testing found no traces of corn in Prevacid (I’ll also add that I still laud their effort to careful source and test their ingredients). Since formulations change, I just called [4/7/16] to confirm. I also only state this for other parents reading this thread and are trying to figure out what their child may still be reacting to if they are taking Pevacid and have a concern over corn. It was confirmed to me that Prevacid capsules contain full corn starch (that is the ‘starch’ component). Prevacid solutabs contain mannitol (stated may be derived from corn) and their strawberry flavoring contains dextrose and other corn derivatives that are proprietary. If someone is reacting to corn starch or dextrose, I don’t want them to think that Prevacid is safe. Generic Prevacid (at least Equate brand) clearly lists corn starch as an inactive ingredient. 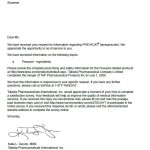 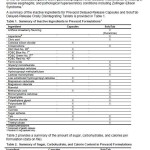 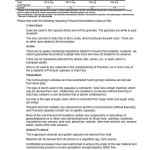 We have found that Prilosec OTC capsules (containing enteric-coated beads) mixed with TummyCare Max registered zero corn traces on an evaluation we had performed.