When giving blood sip on this: Jane Martin by the way giving blood was a breeze. I sip on 20 oz. concoction of 500mg whole food C (pure synergy), 16oz. coconut water, a couple quirts of mag-chlor, and 1 heaping tsp. raw red beet powder

Ferritin is an Iron STORAGE Protein…

The MOST important # to have accuracy & currency of is your Ceruloplasmin (Cp). Again, my opinion, but ALL Iron markers in the blood are WORTHLESS without knowing our Cp status…

I am seeking THE EXACT DEGREE OF SCRUTINY & DISCERNMENT… Iron assessments based on Ferritin-ONLY blood tests are similar stature.

The MAIN difference, however, is that the Thyroid dynamic will make you feel lousy… However, the Iron dynamic will KILL you — and that’s a FACT!… as noted in my 30+ Posts on MAG re Iron dysregulation….

IRON ISSUES ARE NOT SOLVED BY IRON… THEY ARE SOLVED BY THE COPPER-DEPENDENT ENZYME, CERULOPLASMIN… as it REGULATES and affects the mechanics & optimization of Hephaestin, Transferrin, Ferroportin, Ferritin, and Hepcidin…  Period!

Fungus feeds on Iron… It’s a fundamental fact that changes how you read that book AND solve this condition. You do NOT attack the Fungus…

You build up Ceruloplasmin(Cp) which enables the body to naturally address the Fungus via SOD (Superoxide Dismutase), which is dependent on bioavailable Copper; and you take steps to lower your Iron burden… 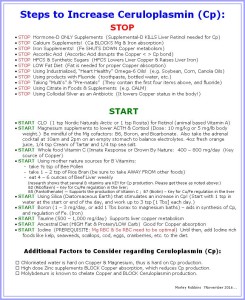 It’s taken me [Morley Robbins] 5+ years of relentless research to realize that Mg deficiency is CAUSED by:

o soil depletion
o soil ADDITIVES (Glyphosate!)
o poor absorption
o a WIIIIIIIDE array of Stressors!, not the LEAST of which is the outrageous Iron Toxicity Burden we are ALL shouldering & stomaching…

And to your point, yes, Paleo has more fat, which enables the absorption of Copper, that enables the production of Ceruloplasmin in our Liver & thereby enables our metabolism to MANAGE ALL THAT IRON…

Ferritin is the LEAST valid Iron marker. It is the “Trunk” of Iron metabolism. The “Engines” are Hemoglobin & Ceruloplasmin (Cp)…

Whenever I have “engine trouble” w/ my car, I expect the Mechanic to focus on the Hood, NOT the Trunk.

“LOW” Ferritin shows in Iron-toxic people as a coping mechanism to excess Iron in the tissue(s).

Pls know, 95% of my clients have “Anemic” Ceruloplasmin (<25 mg/dL) & RAGING symptoms of Iron Overload. The other 5% have elevated Cp, & confirmed Inflammation (CAUSED by excess, unmanaged Iron…)

Excess, dietary Iron from Food (Iron filings in flour, HFCS, GMO, Om-6 Oils, etc) & supplements are perceived as “Stress!” in a body that has LOW bioavailable Copper because the Liver is overwhelmed by being “D”rowned in Hormone-D that SLOWS Ceruloplasmin (Cp) production that allows that excess Iron to wreak HAVOC ALL OVER THE BODY!…

Does that make sense?…

Ferrous & Ferric Iron…
o Ferrous (Fe++) Iron is usable Iron
o Ferric (Fe+++) Iron is unstable and is the state that Iron is Transported in…
o To move from Fe++ >> Fe+++ requires Oxidation, which is the removal of ONE electron…
o One of Ceruloplasmin’s MOST IMPORTANT jobs is to Oxidize that Iron so that it can be properly loaded into Transferrin, as well as into the Iron Storage protein, Ferritin.

This FACT about Ceruloplasmin’s REGULATORY role of Iron has been thoroughly researched and well known in RESEARCH circles since 1966. It is wonderfully depicted in Figure 6 of this article (found on pg 7). This is apparently NOT taught in Medical School… (You all can connect the dots on that obvious disconnect!) The Role of Ceruloplasmin in Iron Production

Barb Lawson,
The object is NOT so much to deny our body of the Iron that is needs… but it is to focus on OPTIMIZING the production of Ceruloplasmin (Cp) production in the Liver and overcome the “D”in of “D”ietary “D”eception & “D”irectives that we have en”D”ured for the last 70+ years…

The “IRON-y” of this ENTIRE Cholesterol saga is that the Human Body is increasing Cholesterol to MAKE MORE “Stress!” Hormones to neutralize the BURDEN of the “Iron Stress!”…

#32 The object of mother nature is to mobilize iron, and thus, the importance of Ceruloplasmin is to keep iron moving. (May 26, 2016):

#33 You are not anemic! Raise your Ceruloplasmin, because it GUARANTEES iron circulation throughout your body, just as mother nature intended. (June 19, 2016):

(Facebook link with links to all of the above)

Iron is the MASTER PRO-Oxidant mineral in our bodies…

It MUST be BOUND by absorption/transport/metabolic proteins OR IT CAUSES RUST…
Examples of KEY Proteins to MANAGE Iron:
o Hephaestin (a “cousin” of Cp that enables absorption of Iron)
o Ceruloplasmin — ESSENTIAL Enzyme to enable loading of Iron onto Transferrin…
o Transferrin — Major transport protein that carries two Fe atoms
o Hemoglobin — Major metabolic protein that holds 2/3 of Iron in the body and transports Oxygen to ALL tissues in our body
o Ferritin — Major storage protein for Liver, Spleen and Bone as they are MAJOR players in Reticuloendothelial System that Recycles Iron for the continuous process of re-building Red Blood Cells throughout the body. FERRITIN IS NOT SUPPOSED TO BE ELEVATED IN THE SERUM. (Kell & Pretorius, 2014).

Hope that sheds important light on this key issue…

02/03/16: Morley’s most recent video interview where he discusses Iron Overload as well as Magnesium.
[jwplayer mediaid=”136515″]

Three part series on Iron Overload from The Cleveland Clinic. It will give you a good picture of why you need to pay attention to Iron Overload as well as FLD, Fatty Liver Disease.

When part 1 is done it will advance to part 2 and then part 3.

note to self: Multi-Copper Oxidases and Human Iron Metabolism

(helps explain the interplay between Copper enzymes & the regulation of Iron)

Please note, I have YET to see this *dream* profile in ANY client, to date… In large part because the System trained us — like Circus Bears — to demonize Copper and worship at the Altar of Iron!

Again, it’s a work in progress..

Morley on MERCURY:
what I’m learning is that Mercury is MOST toxic in a body that is “Copper Deficient” AND “Iron Overloaded…”

And what has SOLIDIFIED this catty-wampus Cu<>Fe dynamic in our Livers are the convergence of several KEY events from the early 1980’s:
o High Fructose Corn Syrup… (see the compelling research of Mary Fields, PhD in the 1980’s…)
o GMO<> Glyphosate… (see the research that profiles the Copper-binding qualities and Iron generating qualities of this toxic combo…)
o Change Vaccines to include BOTH Aluminum & Hg (the former WHIPPING up Iron into a frenzy…)
o Change the composition of Hg amalgams to ADD Copper that increased its Toxicity 20X (According to Ann Louise Gittleman…)

So, I think we have a Chicken/Egg phenomenon going on. And yes, I’m well aware of the rogue & profoundly destructive nature of this Heavy Metal that weighs 200, vs Mg @ 24 and Copper @ 63.5. It is a Suma Wrestler of the highest order. And it’s intriguing that Mercury has both Estrogenic qualities AND an affinity for Copper-dependent enzymes. It’s ALSO intriguing that there are several homeopathic approaches for clearing Mercury — ALL of which are based on the energy of Copper…

And while it’s tempting to “Attack the Guest…” my overriding preference is to “Strengthen the Host,” esp. the Adrenals that have worked throughout Millennia to CLEAR Hg — esp. when it’s NOT being hosed by Low Usable Copper and High Unusable Iron as is SOOOOO prevalent today… Tragically, Homo Normalus (based on optimal levels of Magnesium AND Copper…) is a rapidly disappearing species on this Planet…

The above ^^^ offers a different perspective, but one that warrants further consideration, and application, in light of the dramatic Cu<>Fe imbalance that is RAGING in the Global populous and our collective Livers & Brains…